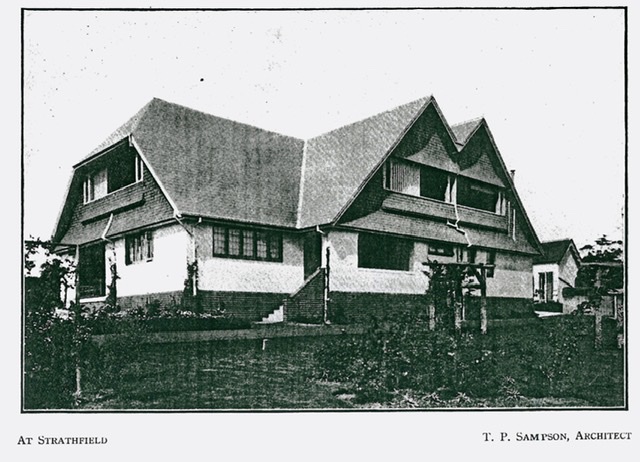 ‘Kama’ 16 Llandilo Avenue Strathfield, is built on land created by the subdivision of the ‘Llandilo Estate’ in 1910, which also created the street on which the house is located.

Strathfield Council minutes of September 1911 record approval for construction of a brick house in Llandilo Avenue Strathfield for the applicant, architect Thomas Pollard Sampson, and the house owner Mrs Clarisse Maiden (d.1954), wife of auctioneer and pastoralist William Maiden (d.1937).  The estimated cost of the building was £2,500.00.

Maiden, was a partner in the firm of Maiden Bros., stock and station agents, which was established by his father George.  Maiden Bros operated from the Homebush Saleyards. Many managers of the large pastoralist and stock firms lived in Strathfield during this period, likely due to proximity to their businesses at the Homebush Saleyards (now the site of Sydney Markets).  Maiden later managed the stock department when the business was acquired by Commonwealth Wool and Produce Co.

This house was featured in The Salon, publication of the Institute of Architects NSW, June 1916.

Mrs Maiden was the owner until c1920, when ownership transferred to Effie Gertrude Fletcher, wife of John Fletcher, a retired grazier. Fletcher was in partnership with his brother, William, in several grazing properties, including Kentucky, which is located outside Uralla in Upper NSW. Later, he bought out his brother, and the station has continued to be owned and still (as at 2019) under the title of J. Fletcher and Sons.

Following the death of John Fletcher in 1936, in September 1938, Mrs Fletcher sold ‘Kama’ for £4250 to Fred Owen Cull, a Manufacturer/Boot Warehouseman.

Recent Domestic Architecture in New South Wales and Some Thoughts Thereon’, 1916 1 June, The salon :  Journal of the Institute of Architects of New South Wales., v.6, no.5.