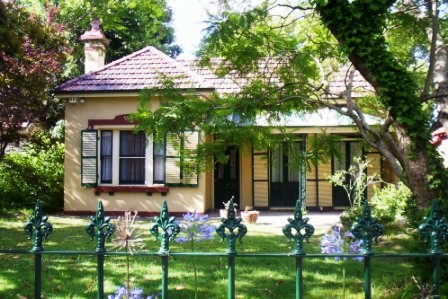 ‘Kima’, 11 Albyn Rd Strathfield is the oldest house in this street.  Albyn Rd, known as Railway Street until 1886, was laid out in the 1867 subdivision of the Redmire Estate in which it was built.

The house  known as ‘Airlie’ at 11 Albyn Rd was built c.1881 for Captain Robert Moodie, a professional sailor who served as a director of the United Insurance Company and old Queensland Steamship Company.  He was also a managing trustee of the Presbyterian cemetery, Rookwood.  Moodie named the house ‘Kima’ and lived at the house from 1881 to until his death in 1899. Ownership transferred to J S Cargill, likely his grandson, John Sydney Cargill (d.1932), solicitor for NSW Railways. During Cargill’s ownership, the house was tenanted.

‘Kima’ was from 1921-1924, the home of Frank Whitehouse, a Professor at the University of Sydney.  It was then owned by Desmond O’Brien, a real estate agent, who renamed the house ‘Dane Bank’.  The house has more recently been named ‘Kima’.