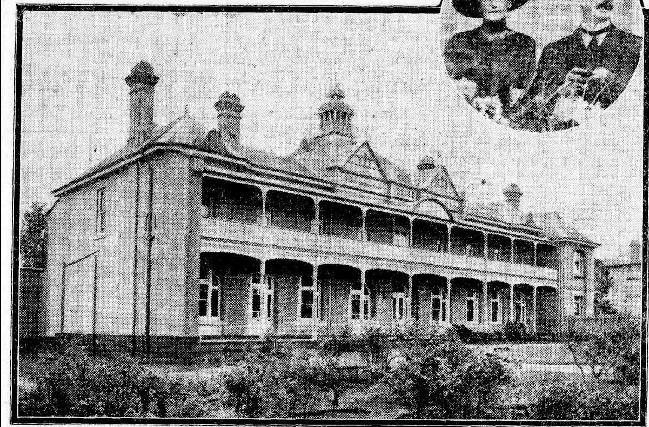 The building occupied by the Catholic Institute of Sydney, 99 Albert Road Strathfield has had a number of significant institutional uses.  The photograph above featured in a 1922 newspaper article.

In 1902, the building was acquired and occupied by the Bedford Collegiate School for Girls with Miss Ford as Principal.  As the newspaper article from  the Daily Telegraph in 1902 suggests the school had elite status based on the guests attending a social function who were prominent and well connected.  The guests included George Reid and Mrs Reid (NSW Premier and Australian Prime Minister), T H F Mackenzie (MLA and Mayor of Strathfield), Rev. H J Rose of St Anne’s Anglican Church and Dr George Sly, a prominent barrister.

In 1921, the site was acquired by the Australian Protestant Orphan Society, which had been established by the late Rev. W M Dill Macky.  A Dr Dill Macky Memorial Protestant Home had previously been opened in Auburn.  The Strathfield site was intended to provide accommodation for 200 children.   Interestingly given its future use as a Catholic Institution, when the institute was formally opened in March 1922 by Mr R E Baron of the Loyal Orange Institute of New South Wales, he said ‘that the promoter had realised that Rome was getting in Protestant orphans, in the hope of making them Roman Catholics. They as Protestants, had been too dilatory in the past in allowing Rome to carry on the orphanage work and gather in the children to make Roman Catholics of them (Applause)’.

In 1951, a neighbouring house ‘Ukalunda’ was acquired by the Trustees Australian Protestant Orphans Society  and was added to this site.

During World War II, the building was temporarily occupied by the Australian Army and used as a barrack for women.   The Dill Macky Protestant Orphanages Home was sold in c.1957 to the Commonwealth Government and became the Training Centre for Australia Post.

In the 1990’s, the building was acquired by the Catholic Diocese of Sydney.  The Veech Library were built in 1993, the architect was Scott Carver & Associates.   The architect of the seminary extensions was Michael Fox & Associates.