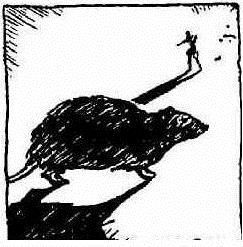 A very strange article and illustration appeared on page 1 of the Evening News, Wednesday 26 February 1930 about game shooting of rats in the Strathfield tip.

The article stated “Out in the wilds at Strathfield Council’s tip, local residents hunt game with rifles.  The Mayor, Alderman Firth, told Council last night that rats were over-running the tip, and local sportsmen took their cars and pea rifles down to the tip at night.  Spotlights were turned on the rats, and the sportsmen shot them.  Alderman Davey suggested that Council inform the tourist bureau of the sport to be had at Strathfield”.

The tip in 1930 was also known as the Council Quarry.  According to the 1930 Sands Directory, the Council quarry was located in Sir Thomas Mitchell’s Road (now known as Mitchell Road).  The quarry was over 4 acres in size. I assume that Centenary Drive is built over part of the old Quarry. Today part of this land is Frank Zions Reserve in Mitchell Road Strathfield and is part of the Bay to Bay Cycle/Walkway.